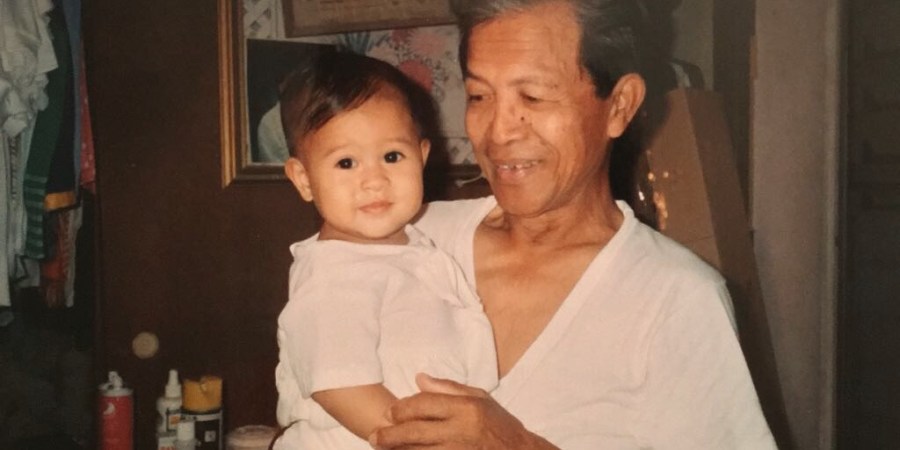 My grandpa is 92 years old, and he still has the sharpest memory of almost anyone I know.

He loves to tell stories, and one of his favorites is how he used to take care of my Auntie Nora when she was a baby. When he was only a pre-teen, he left his hometown of Gimba to live in Manila with his older brother Cirilo and wife Hosma. He took care of Nora at home while they worked: he changed her diapers, played with her, and carried her.

Some days he even took her to school with him. He tells me his teacher carried Baby Nora while he did his schoolwork sometimes. At such a young age, he was already selfless and taking care of others.

A few years later, when he was a teenager, he saw disaster strike his beloved homeland. He volunteered to fight in World War II, to defend the Philippines and his people. My grandfather was tortured by Japanese soldiers and today is almost deaf because he lost his hearing as a gunner in the Army. But still, he tells me he would enlist in the military and serve the Philippines and the U.S. all over again, if he could.

While he was already in his 70s, I remember my grandpa still took care of me. As a kid I loved mangoes. My grandpa would buy me mangoes all the time — those yellow-skinned Philippine mangoes with the juiciest, sweetest insides that would make my fingers all sticky as I ate them down to the seed. He bought me entire boxes full of them: like 20 mangoes just for one little girl. I remember watching him slice them for me and I’d eat them chilled — the most decadent, satisfying treat to enjoy while beads of sweat dripped from the nape of my neck, during an afternoon at his house in Liguan Terrace.

Tonight, he isn’t feeling his strongest. He has kidney disease, an aneurysm, internal bleeding, loss of appetite, and a slew of other problems yet to be diagnosed. Almost a century old and he was dragged to a CAT scan, x-ray, needles prodding through his tissue-thin skin, laid on a hospital bed on the side of a hallway with little dignity.

After being in the hospital and waiting for proper care for five hours, he opens his eyes from his restful state. He looks at me, with dew in the corners of his eyes.

I wait for him to finish his sentence, wondering if he wants a drink of water or one of the bananas we’ve snuck into the ER in my backpack. He hasn’t eaten in eight hours.